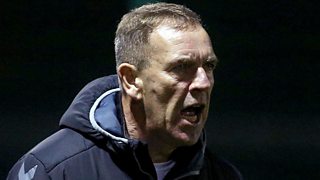 Derry City manager Kenny Shiels walks out of an interview with BBC Radio Foyle's Dessie McCallion after a series of tense exchanges.

The Candystripes won the EA Sports Cup last month to clinch their first trophy in six seasons but have slipped to seventh in the League of Ireland table after losing 18 of their 34 games.

Derry face Bray at the Carlisle Grounds on Monday night before their last game of the season at St Patrick's Athletic on Friday.