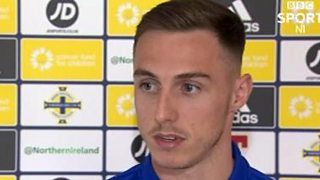 The 22-year-old has scored three goals in six appearances for Oxford following his summer move from Irish Premiership champions Crusaders.

Northern Ireland take on Bosnia-Herzegovina in their opening Nations Cup encounter before a Windsor Park friendly with Israel on Tuesday.