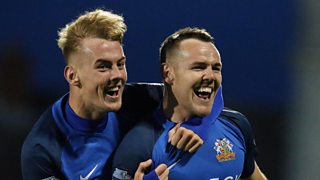 Glenavon too strong for 10-man Ballymena

Glenavon move top of the Premiership thanks to a 4-0 win over 10-man Ballymena United at Mourneview Park.

Glenavon go above Linfield on goals scored while it was a first defeat of the season for Ballymena.