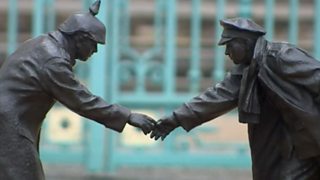 Nottingham Forest and Notts County will host matches of remembrance between British and German army teams to commemorate 100 years since the end of World War One.

Forest's City Ground home will host a men's match between the British Army Football Association and the German Bundeswehr on 8 November.

Across the River Trent a women's match between the two forces will take place at Notts County's Meadow Lane ground earlier on the same day.