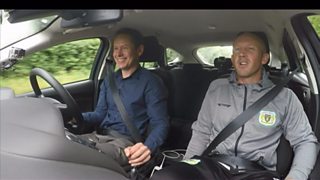 Yeovil Town boss Darren Way gets a lift to Huish Park from BBC Points West ahead of the 2018-19 EFL season.

The 38-year-old former midfielder made over 200 appearances during his playing career with The Glovers, before he was appointed manager in 2015.

Way was speaking to BBC Points West's Ali Durden for the fourth of the six-part, Team Talk Taxi series.