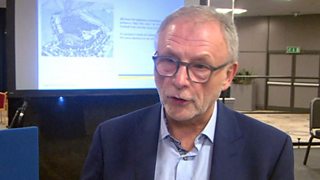 The £40m arena would also incorporate a concert venue, a hotel and leisure facilities.

Osborne has been a controversial figure among fans since taking over the club in December 2016, with many opposed to his plans to re-home the former EFL club.

"We know that if we can put all of this together there's going to be a real interest. That is going to bring the investment that is necessary as we put this together," Osborne told the BBC.