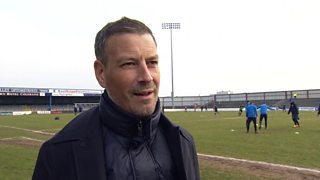 A team of Saudi officials took charge of Coleraine's 1-0 win against Warrenpoint Town at the weekend, which Coleraine boss Oran Kearney described as "not too bad".

"For a game of this magnitude at this stage of the season, I would have been more happy with some of our local referees," added Kearney.