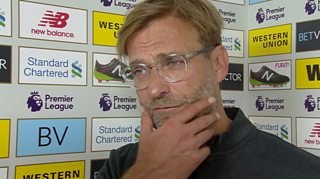 Liverpool boss Jurgen Klopp says the tension during his side's 1-0 victory over Crystal Palace is part of the "all-inclusive package" of watching the Reds.

When later asked about the ongoing speculation surrounding Barcelona target Philippe Coutinho, Klopp adds: "I can only coach the players available to me."

Watch highlights of all the weekend's Premier League matches on Match of the Day from 22:25 BST, BBC One and the BBC sport website.