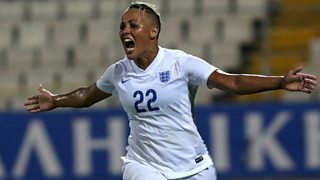 'Everyone must conform with England'

Two further England players have told BBC Sport of their experiences while playing for their country under Mark Sampson.

The England coach said on Thursday he is "looking to improve" his "communication style" after being cleared of racial abuse following a complaint by striker Eniola Aluko about "bullying and harassment".

Former England midfielder Lianne Sanderson, 29, said she felt as if she had "fallen out of favour" and was unappreciated, particularly when there was a lack of recognition for winning her 50th cap.

She blamed the culture in the team and said it seemed opinions from players were not welcome.

"I think it's a matter of everyone must conform," Sanderson said. "It's not a matter of being a rebel but I think there's a lot of bias there and subconscious manipulation.

"I think I've become controversial because I'm not a robot and I'm not going to be told that I can and cannot say in interviews.

"It's an environment where you're not allowed to have an opinion and any kind of opinion is the wrong one."

Defender Anita Asante, 32, has also told BBC Sport she felt singled out in the way she was dropped from the squad.