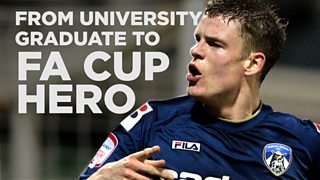 BBC Sport meets striker Matt Smith, who combined studying for a university degree whilst playing non-league football, before a move to League One Oldham saw him face Liverpool and Everton in the 2013 FA Cup.

Now at QPR, Smith scored in their fourth round replay win over Portsmouth and is set to face Premier League Watford on Friday 15 February.

Watch live coverage of the FA Cup fifth round across BBC Sport this weekend - including Chelsea v Man Utd live on BBC One on Monday 18 February.

Premiership may relax rules for Scots

2021 World Cup set to be postponed for year