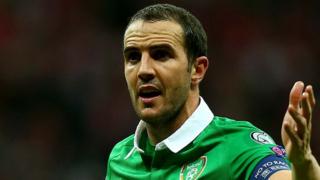 Republic of Ireland defender John O'Shea says the entire squad was left "hugely disappointed" by the knee injury to Rob Elliot in Tuesday's draw against Slovakia which could rule the Newcastle keeper out of Euro 2016.

"We're a tight group and we're gutted for him," said O'Shea after the 2-2 draw in Dublin.

"We'll wait and see what the official confirmation is."

O'Shea felt that the Irish produced an encouraging display which had created "plenty of chances".