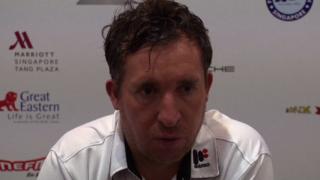 Former Liverpool striker Robbie Fowler says he would "absolutely love" to work alongside the club's next manager and help bring back "the great football that we deserve".

Fowler, who scored 184 goals during two spells with the Reds, also gives his backing to bookmakers favourite Jurgen Klopp and Carlo Ancelotti to replace the departing Brendan Rodgers.

The 40-year-old Liverpudlian goes on to praise Rodgers, calling him a "very good Liverpool manager".

Is Aguero on the way out at Man City?