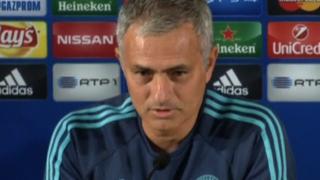 Mourinho does not want 11 Costas

Asked if he would like a whole team of players like Diego Costa, Chelsea boss Jose Mourinho jokes he would lose every game, such is the "desire to suspend him".

The striker is available for Tuesday's Champions League match in Porto because his domestic three-match ban does not extend to European games.

Mourinho says there are no "untouchable" players in his side as he returns to the Portuguese club he led to Champions League triumph in 2004.