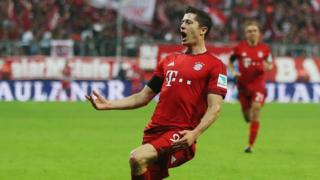 The Polish striker stepped off the bench at half-time against Wolfsburg to score all Bayern's goals during a 5-1 comeback win on Tuesday.

Lewandowski scored the quickest Bundesliga hat-trick (four minutes), then set a new record for four goals in the same match and then did likewise for five, too.