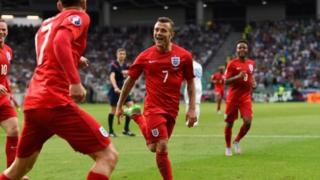 The 23-year-old smashed home his first two international strikes in memorable fashion, drawing comparisons with some of England's greatest ever goals according to BBC Sport's Gary Lineker.

Hodgson, who also compliments "reliable" captain Wayne Rooney, has now seen his side win six out of six Group E qualifying matches for the 2016 European Championships.