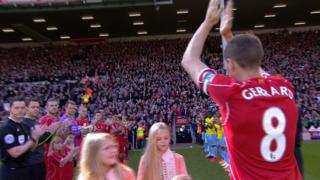 Liverpool captain Steven Gerrard receives a guard of honour ahead of his side's Premier League contest against Crystal Palace, his final appearance at Anfield.

The 114-time capped former England international stated in the week that he was "dreading" the occasion.

Gerrard, who made his Liverpool debut as an 18-year-old against Blackburn in 1998, has made over 700 appearances for his boyhood club and is due to move to LA Galaxy at the end of the season.

Bruce will do 'utmost' to find leak