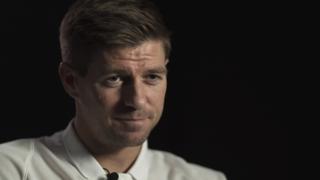 The Liverpool captain will play his final home game on Saturday against Crystal Palace, before leaving Merseyside for Los Angeles in the summer.

Gerrard says his departure came "slightly quicker" than he expected, but that now is the right time to depart his boyhood club.

Watch more from Steven Gerrard on Football Focus, Saturday 16 May, 12:10 BST on BBC One and the BBC Sport website.