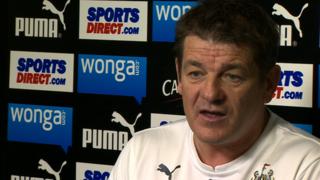 Newcastle United boss John Carver says he believes he is "the best coach in the Premier League".

Since the 50-year-old was asked to take over as manager from Alan Pardew at the end of 2014, the Magpies have taken nine points from a possible 48 and are just two points above the drop zone having lost their last eight successive matches.

Carver also uses his pre-match press conference to brandish a hand-written note from club captain Fabricio Colocinni in an attempt to prove the Argentine's open letter to fans was not a publicity stunt organised by the club.

Struggles propel me on to highs - Leach