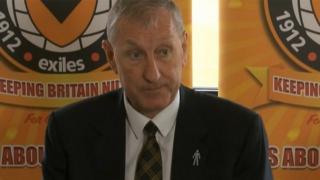 Terry Butcher says he is excited by the potential at Newport County after he was confirmed as the League Two club's new manager.

The former England captain says there is no reason why County cannot emulate the feats of Bournemouth and Swansea City and climb up the divisions.

Butcher, who has also managed Sunderland, Coventry City, Inverness and Hibernian, has been appointed on a two-year deal.