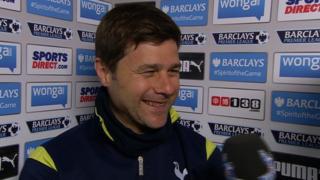 Tottenham boss Mauricio Pochettino congratulates Harry Kane on scoring his 30th goal of the season in Spurs' 3-1 defeat of Newcastle.

Kane became the first Spurs player to hit 30 goals in a season since Gary Lineker in 1991-92 when he added Tottenham's third goal following Nacer Chadli's 25-yarder and Christian Eriksen's free-kick.

The win sees Spurs move above Southampton into sixth in the Premier League table.

'One of India's greatest ever wins'