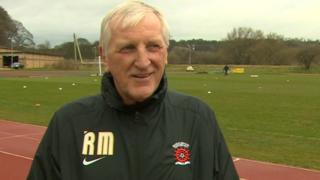 Pools survival would top it all - Moore

Hartlepool United manager Ronnie Moore tells BBC Look North that if he keeps the team in the Football League, it will be his biggest achievement in football.

The 62-year-old's side have won their last three games and are now just a point adrift of safety, going into Saturday's home game with Cambridge United.

Pools have been in League Two's relegation zone since 21 October.