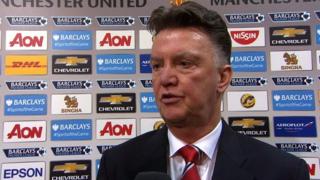 Manchester United manager Louis van Gaal says he "can't predict a top four finish" but hopes his team are "still there at the end of the season" after they beat Sunderland 2-0 at home.

A second half penalty by Manchester United's Wayne Rooney gave the hosts the lead, while a second for Rooney late on sealed the win for the Red Devils.