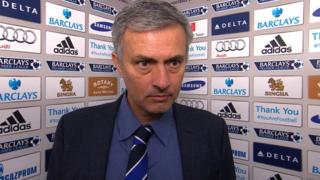 The Chelsea manager appeared to have ended his interview with Match of the Day's Jonathan Pearce early, avoiding a question about his players' discipline following an on-field melee after Everton's Gareth Barry was shown a red card - but returned to complete the interview shortly afterwards.

Tuchel set to come in after Lampard sacking - reaction

Button to drive in Extreme E for own team

Who has been your team's star so far?