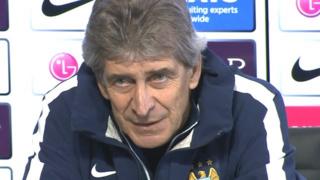 Chelsea game not a final - Pellegrini

Manchester City manager Manuel Pellegrini says Saturday's away trip to Chelsea "is not the game that will decide the title".

Despite a gap of five points between City and the league leaders Pellegrini says "it is not a final" and that he "does not feel pressure".

The Chilean also comments on Diego Costa's ban for stamping and hopes the Blues striker's behaviour "will change in the future".