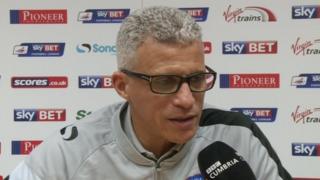 Fans need to back Carlisle - Curle

The Cumbrians's home game with Mansfield Town has been earmarked for a possible supporter demonstration about the current board of directors, but Curle is concerned off-the-field protests can impact on the players, bidding to avoid relegation from League Two.