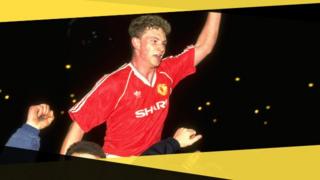 On this day 25 years ago, Mark Robins scored one of BBC Sport's iconic FA Cup goals at Nottingham Forest to save Alex Ferguson's job as manager at Manchester United.

In January 1990, a large part of United's supporters wanted Ferguson (the knighthood was another nine years away) out of the club.

United had lost at home to Crystal Palace the previous month, prompting a banner in the Stretford End that accused Ferguson of presiding over "three years of excuses" at Old Trafford.

Defeat away to an in-form Forest in the FA Cup seemed a distinct possibility - and the rumour was such a result would be Ferguson's last in charge.

Whether he would have survived remains one of football's great imponderables because instead Mark Robins nodded in the only goal of the game.

United went on to lift the FA Cup, beating Crystal Palace 1-0 in a final replay. It was the first of 38 trophies, including 13 Premier League and two Champions League titles, that followed in Ferguson's glorious 26-year reign.