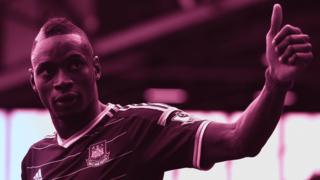 BBC Sport looks at some of the most eye-catching statistics from the weekend's Premier League action.