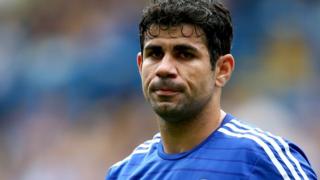 Chelsea boss Jose Mourinho says striker Diego Costa has "a little chance" of playing against Manchester United in the Premier League at Old Trafford on Sunday.

The Spain international, 26, has been recovering at home from a virus which required hospital treatment, and was ordered to train in isolation because of the illness.

Mourinho confirmed striker Loic Remy is definitely out of the United game because of a groin injury sustained in Chelsea's Champions League win over Maribor.