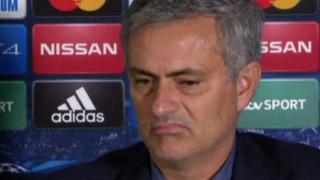 Chelsea manager Jose Mourinho says any discussion about whether his side can win the Champions League is "premature", after a 6-0 win over Maribor in Group G.

Striker Didier Drogba scored his first goal for the club since returning for his second spell at Stamford Bridge - his last strike came in Chelsea's win over Bayern Munich in the 2012 Champions League final.

Substitute Drogba replaced the injured Loic Remy early in the match, and with Diego Costa also doubtful ahead of Chelsea's Premier League game at Manchester United on Sunday, Mourinho joked that the club doctor was "forbidden" to discuss injuries with him.