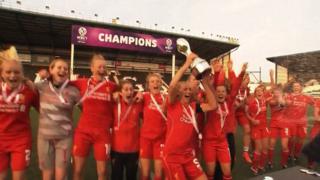 Watch highlights from the three games that decided a dramatic Women's Super League finale in which Liverpool were crowned champions.

Starting the day two points clear, Chelsea were favourites. But their 2-1 defeat by Manchester City left the door open.

Birmingham City could only draw 2-2 against Notts County which meant that Liverpool's 3-0 victory over Bristol Academy gave them the title.

Odogwu and Randall called up by England