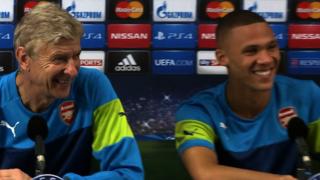 Kieran Gibbs heaps praise on Arsene Wenger on the 18th anniversary of the Frenchman taking charge of the London club.

The Gunners defender is asked how much Wenger has changed during his tenure, to which he replies "not much" - to the amusement of the gathered media.

Gibbs, 25, expressed his pride at working under the manager and said he would "work his hardest" to repay him for giving him a chance and a career in football.

Arsenal face Galatasaray in the Champions League on Wednesday.

'Ignorant & dangerous' - Why tennis' most successful player is so divisive