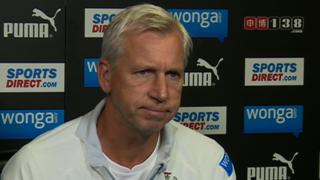 Newcastle manager Alan Pardew says all he can do is "focus on the team" ahead of his side's Premier League tie against Stoke on Monday night, despite alleged negative comments from owner Mike Ashley.

Newcastle United claim the comments attributed to Ashley, which stated that the manager was "finished" if his side lost to Stoke, were a joke and intended to be tongue-in-cheek.

Pardew's future has been under heavy scrutiny with the club bottom of the Premier League after picking up just three points from their first five matches.

Championship: Bournemouth 3-0 up at Barnsley and set to go top