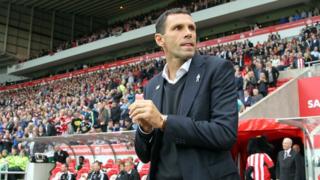 Sunderland manager Gus Poyet is calm about his side's form despite registering a fifth draw in six Premier League games with 0-0 at home to Swansea.

The Black Cats could not force a win despite Swansea playing with 10 men for the last portion of the match after Angel Rangel was given a second caution.

Connor Wickham and substitute Steven Fletcher missed late chances as they both continued to wait for the first Premier League goals this season.

'Four or five teams could win it' - Shearer on title race