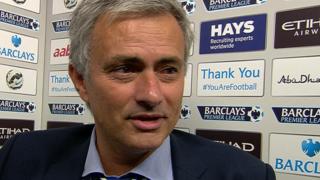 Chelsea manager Jose Mourinho says his side could not make the one man difference count because it was an "emotional" game in the 1-1 draw away to Manchester City.

Frank Lampard scored a dramatic equaliser against his former side to rescue a point for 10-man City, after Pablo Zabaleta was sent off and Andre Schurrle's close-range finish gave the Blues the lead.

Vote for your goal of FA Cup fourth round