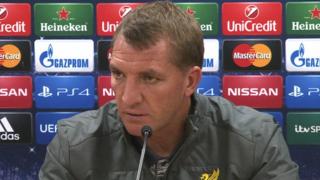 Liverpool manager Brendan Rodgers says he is "excited" about their Champions League clash against Ludogorets at Anfield on Tuesday.

Rodgers expects attacking football from their Bulgarian opponents and says his team have prepared thoroughly for the fixture.

Liverpool have not played in the Champions League since losing 2-1 at home to Italian side Fiorentina in the group stages on 9 December 2009.