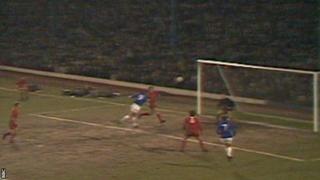 Brian Clark secured immortal status at Ninian Park when his unforgettable winner beat the great Real Madrid 1-0 in Cardiff City's finest hour in front of their own fans.

The striker's 31st-minute header from teenager Nigel Rees' pinpoint cross secured victory in front of an estimated 50,000 fans in the first leg of the European Cup Winners' Cup quarter-final.

Cardiff could have scored more and the South Wales Echo proclaimed: "Whatever happens in Madrid, nobody can take anything away from the players for their wonderful show."

Just as well as the Bluebirds lost 2-0 in the return at the Bernabeu.