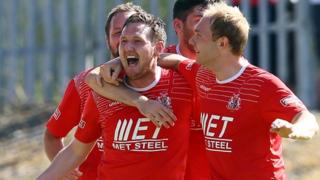 Gary Twigg scores twice as Portadown beat Linfield 3-0 at Shamrock Park on the opening day of the Irish Premiership season.

The third score was an own goal as Ross Redman's low ball into the danger area was diverted in by Linfield defender Sean Ward.

The game was Warren Feeney's first league game in charge of Linfield, the former Northern Ireland striker having taken over from the long-serving David Jeffrey in May.