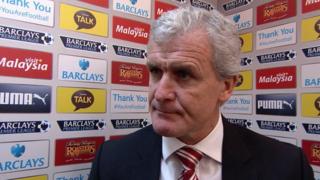 Stoke City manager Mark Hughes says the penalty given to Cardiff in his side's 1-1 draw was a "soft" one while the one awarded to his side was just.

Marko Arnautovic opened the scoring for the Potters following Kim Bo-Kyung's foul on Peter Odemwingie before Peter Whittingham levelled from the spot in the second half after Steven Nzonzi appeared to trip Fraizer Campbell.

Stoke had won five of their previous seven games and need four points from their remaining three games to record their highest Premier League total.