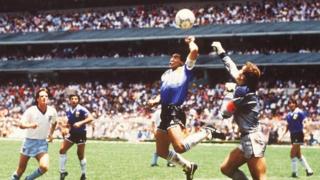 BBC Sport looks back to Diego Maradona's "Hand of God" goal against England at the 1986 World Cup in Mexico.

In what was one of the most infamous incidents of World Cup history, Argentina's Diego Maradona used his hand to score when jumping for the ball with England goalkeeper Peter Shilton in the 1986 quarter-finals in Mexico City.

The officials did not spot the offence and the goal was given, with Maradona later telling reporters he was helped by the "Hand of God".

Murray beaten by Rublev in Rotterdam