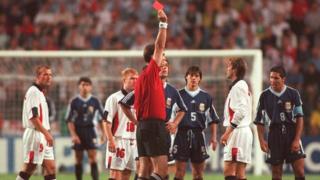 BBC Sport looks back to the 1998 World Cup second-round match between Argentina and England, when David Beckham received a straight red for kicking out at Diego Simeone.

He became at the time only the second player to be sent off for England at a World Cup, after Ray Wilkins received a red card in 1986.