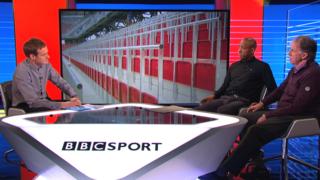 Should standing return to football?

Dan Walker is joined by Dion Dublin and Mark Lawrenson for this week's Focus Forum, where they discuss the ongoing debate in football about safe standing areas in stadiums.

All-seater stadiums have been compulsory in the Championship and Premier League since an inquiry into the 1989 Hillsborough disaster, which claimed the lives of 96 Liverpool fans.

Root's 168 not out helps England dominate