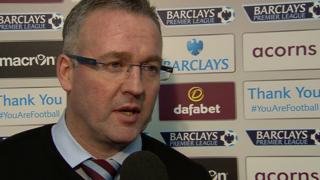 Lambert pleased with second half

Despite losing 2-1 at home to Arsenal, Aston Villa boss Paul Lambert says his side's second-half display against against the Gunners was "excellent".

Jack Wilshere put Arsenal ahead after 34 minutes at Villa Park, before setting up Olivier Giroud for his side's second less than a minute later. Christian Benteke headed Villa's consolation 14 minutes from time, but Lambert's side could not find an equaliser.

Villa's tally of eight points at Villa Park is their worst record after 11 home matches of a top-flight season.