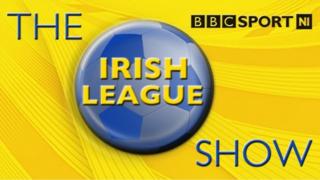 In the programme this week, Michael McNamee and Chris Morgan reflect on the fall-out generated by David Jeffrey's internet singing exploits and his subsequent apology to Belfast rivals Glentoran, plus the controversy surrounding Jimmy Callacher's proposed move from the Glens to the Blues.

On the field, the Blues reached the top of the table by beating Ballinamallard after Crusaders were held to a goal-less draw by Glentoran at Seaview.

Elsewhere, there were wins for Portadown and Warrenpoint Town, while Glenavon drew 0-0 with Ballymena United.