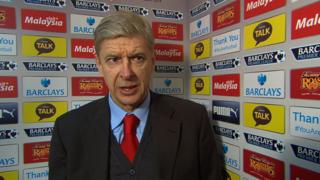 Arsenal boss Arsene Wenger says his side had a "good control" of their match against Cardiff, after the Gunners recorded a 3-0 win.

In-form Aaron Ramsey scored twice either side of Mathieu Flamini's strike to give Wenger's side the points, and extended their lead at the top of the Premier League.

Arsenal have now won 10 of their last 12 Premier League games and continue to hold the division's best away record.