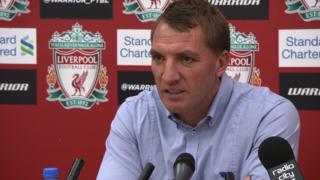 Liverpool manager Brendan Rodgers confirms that Harry Redknapp wanted to offer him the assistant role if he was named England manager.

Rodgers says he would have been open to the opportunity, but Roy Hodgson's appointment made the conversation irrelevant.

Liverpool travel to Newcastle on Saturday and could return to the top of the Premier League table for a few hours until Arsenal play Norwich later in the day.