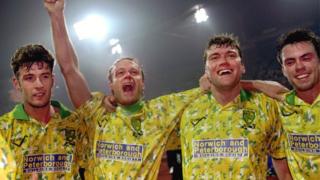 Watch BBC Look East's news report from October 1993, when Norwich City beat Bayern Munich in the Uefa Cup to become the first - and only - English club side to win at the Olympic Stadium.

A stunning volley from Jeremy Goss and a header from Mark Bowen gave the Canaries a famous 2-1 victory in the first leg of their second-round tie.

A 1-1 draw in the return fixture at Carrow Road sealed Norwich's progress, but Mike Walker's side were knocked out in the next round by Inter Milan.