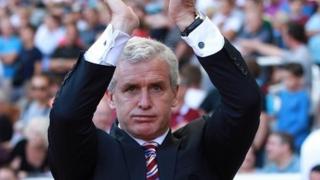 Stoke manager Mark Hughes says his players have not always been given the credit they deserve after their 1-0 victory over West Ham at Upton Park.

Jermaine Pennant came off the bench to score the winner late in the second half and Hughes says the former Arsenal winger is a "talented boy" who is "always a threat".

Stoke have collected six points from a possible nine and are only a point behind leaders Chelsea.