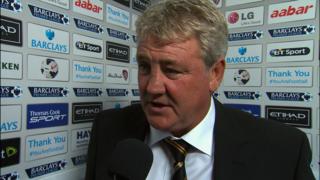 Hull boss Steve Bruce says his side should be proud of their display despite a 2-0 defeat at Manchester City, but admits they must convert more of their chances in front of goal.

Hull missed several opportunities to build a first-half lead, only for substitute Alvaro Negredo to head the hosts in front just after the hour mark, with Yaya Toure curling in a free-kick late on.

Bruce believes the performance will give his newly-promoted team "huge confidence" and proves they are capable of competing in the Premier League.