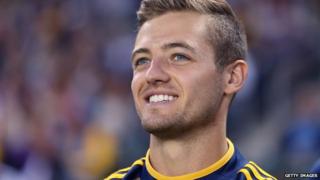 Coming out 'not a big deal' says Rogers

Former Leeds United player Robbie Rogers has told BBC Radio 5 live that he hopes players in the UK can follow his lead in coming out as gay.

The 26-year-old, who now plays for LA Galaxy, is one of only two current professional footballers in the world to come out.

He revealed his sexuality in February but briefly quit the game afterwards - claiming it had made playing "impossible."

Rogers told BBC Radio 5 live's Victoria Derbyshire: "I hope they can learn from my experience if possible... to see that it wasn't a big deal and that I'm still playing football and just carrying on with my life."