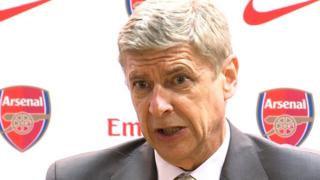 Arsenal manager Arsene Wenger believes the physicality is "one of the attractions" of English football.

The past week has seen controversial tackles in the Premier League, including Darren Gibson's challenge on Theo Walcott in the Arsenal-Everton match, after which Wenger questioned the decision not to send off Gibson.

However, Wenger feels tackling should be kept in the English game, as he says he is "bored" watching foreign matches.

Woods will not face criminal charges over crash

England's George to start against Wales